With new Gun Laws and Gun Regulation claims forming in the news, it is important to understand what your legal rights are when it comes to defending your home, and person.  This is particularly important should you ever find the need to either harm, or even kill, another person in your effort to protect your home, family and person. 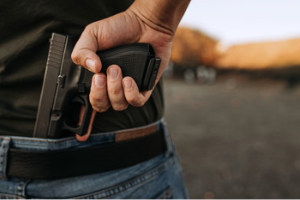 Nevada Revised Statutes sections 200.120 through 200.1.90.  That framework sets forth that lawful gun owners in Nevada can legally stand their ground if they are in reasonable fear for their life.  Where that fear exists, there is no requirement to retreat, even if they can retreat.   While this provides a wide latitude of protection for the gun owner and user, Nevada’s stand your ground law is not an absolute defense.  There are standards that every gun owner needs to know.

Nevada permits the use of force in self-defense situations where:

Based upon the circumstances, the victim had a reasonable fear that they, or another person is facing serious bodily harm or about to be killed;

The shooter was not the original aggressor, nor did they provoke the fight;

Forced To Protect Yourself or Others

The non-aggressor shooter used no more physical force than was necessary to deflect the threat;

Home or Property Self Defense

The shooter had the right to be at the location where the altercation that resulted in the shooting took place;

Understanding The Stand Your Ground Law

The shooter was not in the process of committing a crime when they felt the need to stand their ground when they shot the other person; and The stand your ground law cannot be used as a defense for deadly force used to stop a nonviolent crime.  (This can be the real issue for some claims.  What this law is addressing is where a gun owner comes across a burglary in progress, or some other property crime like breaking into a car.  A gun owner cannot use deadly force to prevent a non-violent crime against property such as coming across a car break in, or simple burglary)

Nevada’s Castle Doctrine protects homeowners, and people in their own motor vehicle, who must defend themselves from intruders. People inside their home or car can assume that an intruder intends to do harm if they break in to their home or car, while the person is inside of it.  Again, this is not absolute.  This assumption that law gives, can be eliminated if the criminal demonstrates actions that indicate they are not seeking to intend harm on the person inside the home or car.  The law does not require a person to wait until there is an immediate threat of harm to fight back or use deadly force, and they do not have an obligation to flee their home or car.   Nevada law creates this additional protection for citizens who need to defend themselves or their families in their own homes, and/or in their vehicles.

Nevada’s Stand Your Ground and Castle Doctrine is not Absolute

Nevada Revised Statute 200.130 defines what is will not be considered Self-Defense

When Someone Says "I'm Going To Kill You"

Essentially, an imperfect self-defense case applies to a situation where the shooter’s belief that deadly force needed to be exercised was simply not reasonable based upon what happened outside of the entering the home, or vehicle.  In other words, the shooter will face criminal charges if they cannot establish that what they did is what a reasonable person would have done in a similar situation. For example—two people get into an argument, and one yells, “I’m going to kill you.” Fearing for their life, the other pulls out a gun and shoots the other. In this case, there is a real problem with the use of deadly force, as “fighting words” like, “I’m going to kill you”, do not by themselves, pose an immediate danger.  No reasonable person would likely have feared for their life requiring the use of deadly force, just because they heard that phrase.

The stand your ground law requires a reasonable and proportionate response to a threat.  However, Hearing a phrase like “I’m going to kill you”, coupled with actions that would lead a reasonable person to believe that the aggressor intended to make good on that threat would change the scenario dramatically.  Finally, where the shooter provoked the attacker to attack, which in turn resulted in the need for the use of deadly force, will not afford the shooter a viable self defense claim.  Facts still matter, and this is particularly true when someone claims to “stand your ground” defense in a location that is not their own home/residence, or their own vehicle.  When a shooting takes place outside of such a situation, such as on the street or driveway, the facts surrounding what prompted the shooting will be of critical importance.

Use of “Stand Your Ground” Defense in Nevada

The stand your ground defense can typically work against any violent crime in Nevada.  Most common violent crimes are assault and battery, robbery, rape, battery, domestic violence, attempted murder, etc. As long as proportional force is used to prevent harm.

We hope this information is helpful.  If you or a loved one suffered personal injuries due to a violent altercation, we are happy to talk and discuss your, or their, legal options.