What Are the Most Common Ways People Are Burned in Car Fires? 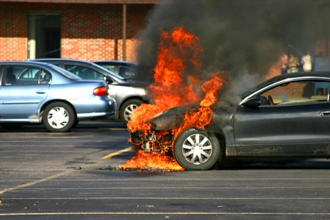 Being trapped in a vehicle that catches on fire following an automobile accident can be a terrifying experience. Unfortunately, the nightmare for victims of these tragic crashes is only beginning. Burns can cause permanent injuries, disfigurement, and scarring that require multiple surgeries, skin grafts, and other treatments—if the victim survives. In addition, burn victims can suffer with depression and other psychological problems from coping with the terror of being burned and the changes to their appearance and their lives. Who is responsible for compensating the victim will depend on the cause of the fire.

Why Do Car Fires Happen?

The causes of car fires are varied, and an accident victim will need to hire an experienced car accident attorney who can determine the cause and liable parties. In some crashes, multiple reasons could have contributed to the fire, which means that more parties could face responsibility for compensating the victim. Common reasons these deadly wrecks occur include:

When vehicles collide in an auto crash, one or both of the fuel tanks could rupture and start a dangerous fuel fire. This can endanger not only the occupants of the vehicles in the crash, but also pedestrians and those in nearby vehicles.

If a vehicle’s fuel tank is leaking, there is a danger that it will explode in a fire, burning and often killing the occupants who are trapped in the vehicle.

When automobile parts are defective or malfunction, this can cause a vehicle to catch on fire. Faulty wiring, leaking exhaust system parts, or defective ignition switches are a few of the many defective vehicle parts that could cause a fire.

When people smoke in the confined interior of a car, they can start a fire. Using the hot lighter or burning ashes igniting can cause fires, endangering the occupants of the vehicle. The driver is also likely to cause a crash while trying to deal with the emergency of the fire.